Fill out this form to book a custom presentation of BidWork for your company.

Protect commercial position when dealing with increasing number of addendums

Over the last 15 years, tender information sent out by clients has become progressively worse...

As the quality of information has decreased,
the number of tender addendums has increased.

A real-life story has inspired the creation of new software that
solves the growing number of addendums during tender.

Causeway is a fantastic estimating tool, but not so useful for
sending tender addendums during enquiries.

Over the last 15 years, information received from clients has become progressively worse. Information is incorrect, drawings contradict specifications and the bill of quantities contradicts the drawings. Estimators find themselves having to distribute more and more tender addendums as new information comes in. Causeway is a fantastic estimating tool but it does not excel at distributing tender addendums, causing confusion among subcontractors during enquiries with potentially negative commercial ramifications.

If addendums are not properly communicated, or understood by,
subcontractors, it can create a significant financial risk for the main contractor

Depending on the contents of the addendum, a poorly communicated addendum, or one that is misunderstood by the supply chain, can leave a main contractor in a commercially vulnerable position. Any addendum received during a tender period identifies changes in the project requirements that require an allowance. These can be both additions or omissions, and so not identifying or misunderstanding these changes could have potentially catastrophic effects on your bid.

If there is a misunderstanding, incorrect or outdated information flow from contractor to subcontractor, there are several issues that can arise, such as:

This can result in a significant commercial exposure with delays and spiralling costs for the main contractor. The wrong price could be put forward, which can throw out profit forecasts as the contractor will be contractually liable to complete the work.

If the error is picked up pre-contract, you can potentially highlight the error to the client. In most cases, the client will expect the main contractor to stand by his offer. The alternative would be having to say to the client that you cannot do the work, and withdraw the tender as your price is inaccurate.

Being perceived as buying work or incompetent

The main contractor’s bid could be considered too low compared to other tenderers, and the client and their team could perceive this as the contractor trying to buy the work or that their submission is incomplete.

Losing a bid as the addendum could have saved money

If the specification or scope of work is reduced, and this reduction is not picked up, then the price put forward will be too high, making the tender uncompetitive, resulting in a failure to secure the work and a loss of costs associated with competitive tendering.

In the case of a lump sum price, where no other quotes were made to compare it with, a contractor may not realise that a mistake had been made until it was too late. Orders could be placed based on incorrect tender figures or specifications which could incur restocking fees.

Having to strip out and install new

If the tender was won, and the error was not corrected, then it could mean more extreme commercial vulnerability if material that was removed during tender but not identified was installed in error and the client requested its removal and replacement. The main contractor then needs to pay for the work, strip out the unwanted work, and install a new item.

Insufficient money in the package

Should the main contractor be successful with a bid based on old or incomplete information, the commercial team on site are faced with a potential loss from the start. Inability to get the package procured for the allowance in tender, could mean a loss on tender.

Reputation is adversely affected with the client

It is crucial to get all addendums understood and priced correctly in order to deliver the client’s aspirations and contractually comply with your obligations. If pricing errors are found, it can cause discomfort with the client as the main contractor tries to rectify them in their bid. Issues can continue on to the site and cause friction throughout the project, which can have a negative impact on future work.

Should part of the scope, materials or specifications be missed, then the contractor will not have like for like comparisons. This will take time and resources to resolve and correct the misunderstanding. Not being awarded the tender because of this does not justify the costs associated with competitive tendering.

If a subcontractor’s price is accepted at face value, and they inform the main contractor at contract stage that they need to increase their price, it can leave the commercial team in a vulnerable position as allowances will be spent very early to cover this unexpected cost. This can cause serious internal discomfort which can be damaging to the business.

Disputes and delays after pre-con stage

If the scope of work or specification is increased in an addendum. and not picked up, the subcontractor may decline to enter into a contract, and the main contractor is left trying to replace them; potentially incurring a loss on that package.

Depending on the size and scale of the missed addendum, it could, potentially, have a negative impact on the programme. A change in scope could open up discussions regarding the durations allowed for specific tasks. Items with longer lead in times to procure could cause serious headaches and further costs if procurements are made based on incorrect information.

How BidWork is complementary to Causeway estimating 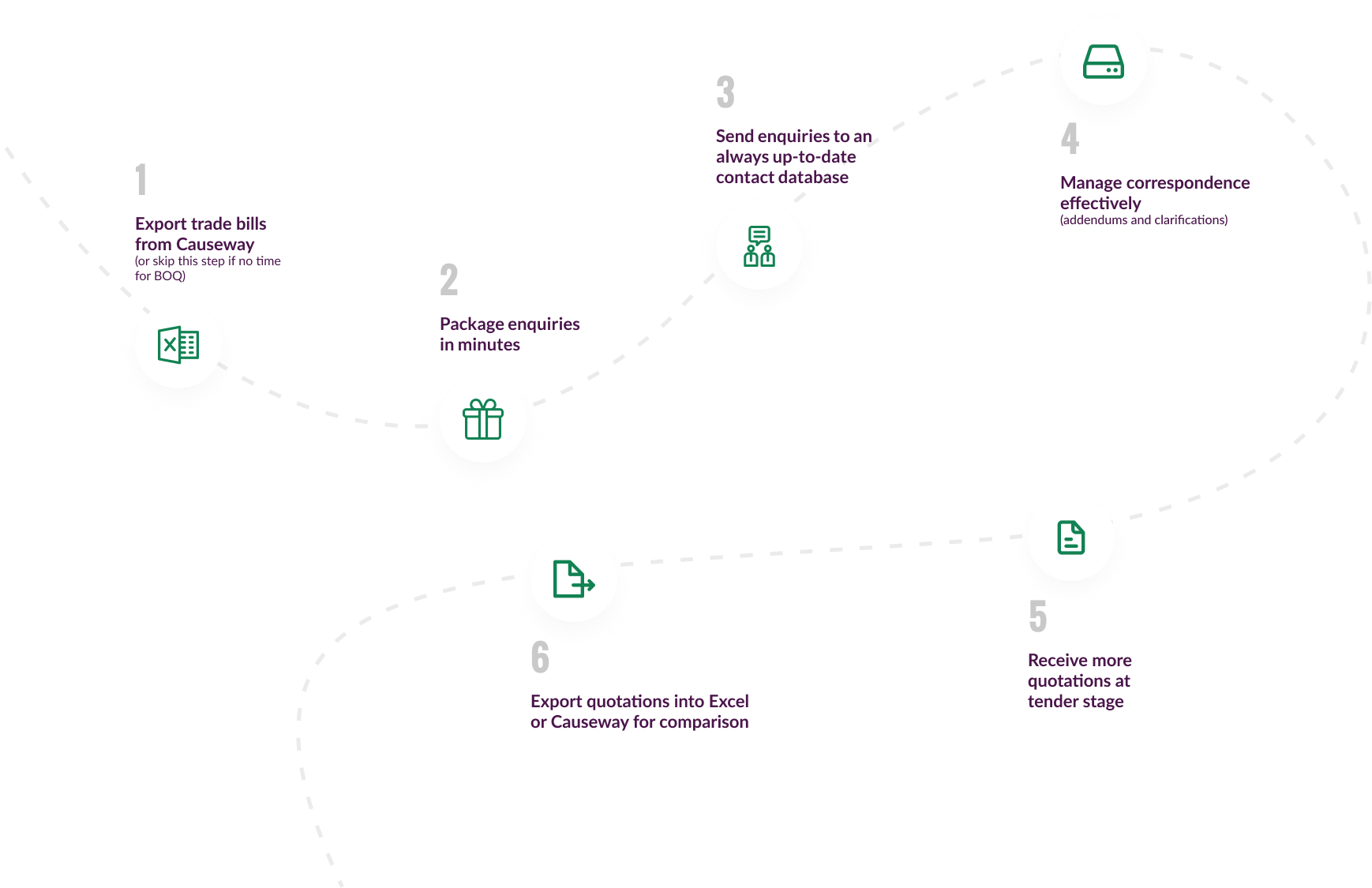 Let our demonstration do the talking...

Schedule a demonstration with us and we'll show you how BidWork can help you.

How BidWork helps to distribute addendums for the main contractor

Timescales when dealing with addendums can often be limited. It's crucial that these documents are communicated properly to the supply chain.

Sometimes an addendum can be a re-issue of the original drawing pack. Picking out changes from hundreds of drawings is extremely difficult, tedious and time consuming.

Once addendum documents are uploaded, BidWork will search for revisions with its special algorithm. If documents supersede existing documents, it will suggest superseding these documents. 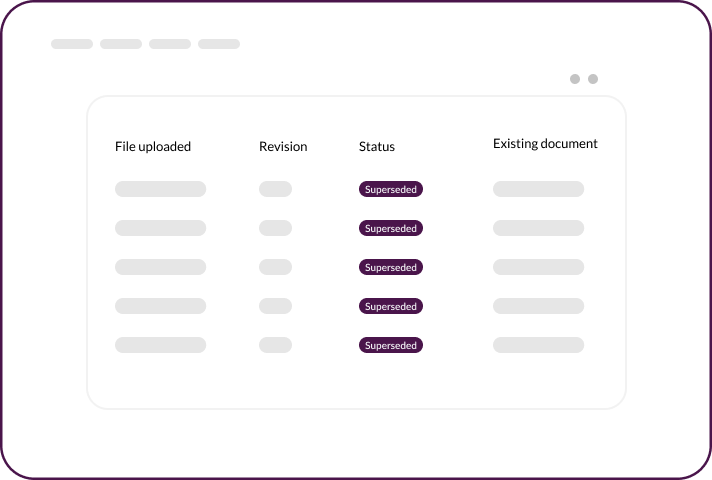 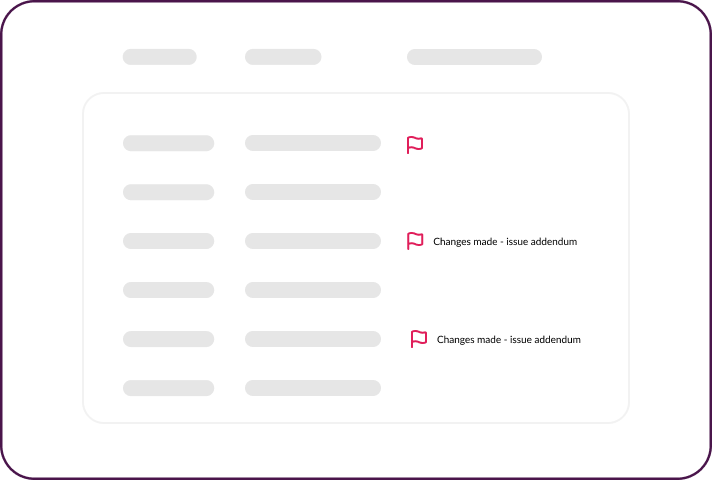 Quickly see which packages are affected and issue addendums

During the tender period, communication of all documents that reflect the changes to the specification or design need to be frequently updated and passed on to the pricing supply chain.

If addendum documents affect any package within BidWork, it will be automatically flagged, indicating that an addendum should be sent for these packages.

You can issue addendums individually per package or for multiple packages at the same time. Only the allocated revised documents will be sent to each individual package.

BidWork informs you when the subcontractor has downloaded the new documents

It is essential that main contractors communicate addendums correctly to the pricing subcontractors.

BidWork not only gives you a central system that will record when the supply chain has received the information, but it also provides clarity regarding the number of documents that have been downloaded by each subcontractor. 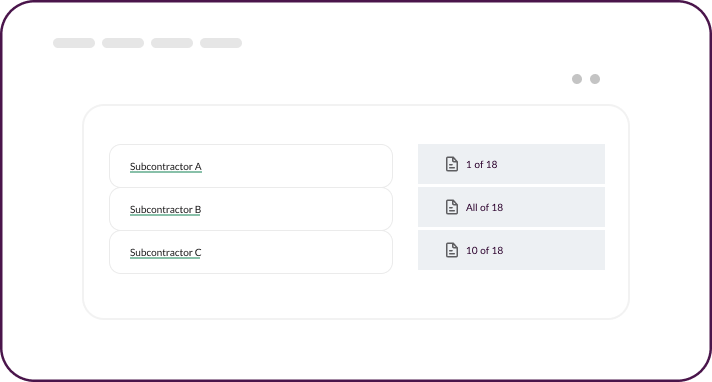 When tender addendums come in thick and fast, it becomes increasingly difficult to ensure that subcontractors are all pricing using the correct information.

BidWork gives you an ‘at a glance’ view per package regarding the information that received quotations have been based on. This enables a more targeted approach when it comes to cross-checking quotations.

How BidWork helps makes addendums clear for both subcontractors and suppliers

Within the current set of documents, new documents are clearly shown

BidWork not only keeps documents within folders, it also has an always-up-to-date 'current set' of drawings and documents. If any documents are added or revised within the current set, it will be clearly marked that there have been changes.

Furthermore, BidWork helps the subcontractors keep up to date by showing them what they have and have not previously downloaded. 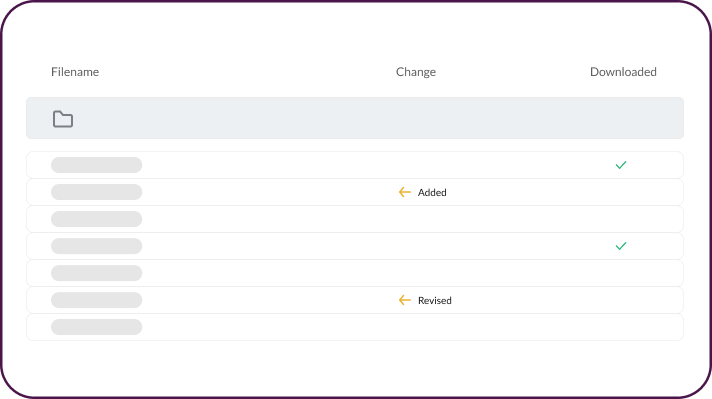 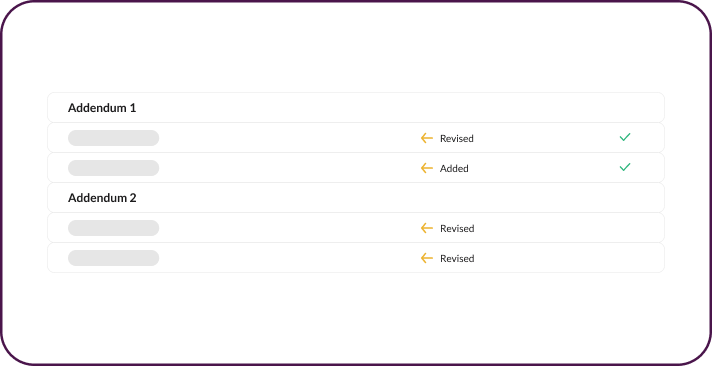 Each addendum is stored for easy reference

It can often happen that subcontractors either fall out of the information process or simply do not have the time to respond to changes.

Some give up when it comes to scouring their e-mail inboxes for e-mails with information about addendums.

BidWork gives them a space just for addendums, so that they can clearly see all the addendums issued for an enquiry, and what the exact changes have been for each individual addendum.

In the myriad of e-mails and pressed tender timescales, it can often be hard for subcontractors to keep track of the latest addendum that they need to account for within their pricing.

BidWork indicates the latest addendum sent at the time of pricing. This gives subcontractors the confidence that they are pricing using the latest information for the enquiry.

See what BidWork can do for you.

Features you expect to find in an online enquiries tool

Features you will love in your next generation online enquiries tool

Get better response rates at the tender stage

Refreshingly new ways to be effective at tendering

Store everything in one place

Discover what other challenges BidWork can also help you with

Risk of missing something in the tender

Dealing with increasing number of addendums

It can be hard to get prices back at tender